If you are looking for words beginning with M for Kindergarten or Preschool, you have come to the right place! Letter of the Day activities and alphabet letter lesson plans have never been easier or more fun. Related: Letter M Crafts This article contains affiliate links. There are unlimited ways to spark more ideas for educational opportunities for the letter M. If you are looking for value words that start with M, check out this list from Personal DevelopFit. Related: Letter M Worksheets

ANIMALS THAT START WITH THE LETTER M:

1. Meerkat is an Animal that Starts with M

Meerkats live in areas of clumpy grassland and deserts in the southern area of ​​the African continent. A family group of meerkats can be called a ‘mob’, ‘gang’ or ‘clan’. These groups usually contain around 20 meerkats but sometimes have as many as 50. The meerkat uses its tail to balance when standing upright. They often stand up in the morning to absorb heat on their bellies after a long cold desert night. Within their territory the clan usually have up to 5 different burrows that they sleep in at night. The burrows have multiple entrances and can be 5 m deep. A clan of meerkats will always have one “sentry” on guard to watch out for predators while the others forage for food. If the meerkat on guard spots danger, it barks loudly or whistles in one of six different ways. For example if the threat is of low, medium or high urgency and if the predator is in the air or on the ground. You can read more about the M animal, Meerkat on Kids National Geographic

2. Manatee is an Animal that Starts with M

Manatees are gentle, non-aggressive marine animals often affectionately referred to as “sea cows”. They have two paddle-like flippers, one on each side of their rotund body, and a big flat tail. These gentle giants have two small eyes one on each side of their head, but cannot move their neck from side to side. To see behind them they must turn their entire body! Even though they have small eyes, manatees have good eyesight. Like dolphins, manatees are smart and can be trained to learn ticks. You can read more about the M animal, Manatee on Manatees Swim Center

3. Mole is an Animal that Starts with M

Gardeners usually don’t like moles very much because they dig holes and tunnels in the yard, but you have to admit, moles are kind of cute! These little animals are about the size of a chipmunk. They’re usually brownish gray to black and they live in North America, Europe, Asia and even parts of Africa. Moles look a little like mice or squirrels, but they’re not rodents. They are digging animals that love to eat bugs. Their favorite food is worms. One mole can eat over 50 pounds of worms in one year. Moles also eat ants, spiders and grubs. Moles have a good sense of smell, but they don’t see very well. In fact, their eyes are hard to find because they’re very small and covered in fur. You can read more about the M animal, Mole on Easy Science For Kids

4. Magpie is an Animal that Starts with M

The magpie is a member of the crow family, Corvidae. It is a general scavenger and predator of insects, small mammals, and other birds’ eggs and young. Magpies are large birds and often have long tails. Very clever birds, they can pass the mirror test. This is when the bird can see itself in a mirror and understand that it is a reflection. Magpies also like bright, shiny things, such as aluminum. You can read more about the M animal, Magpie on Britannica

5. Black Mamba is an Animal that Starts with M

The black mamba is the second largest venomous snake in the world. An adult black mamba can grow up to 14 feet long. The black mamba’s skin is not actually black, it gets its name from the color of the roof of its mouth. It will eat small mammals like rodents and squirrels and keep the rodent populations in check. A shy animal, they like to avoid other animals. However, if another animal confronts them, they become aggressive. You can read more about the M animal, Black Mamba on AZ Animals

CHECK OUT THESE AWESOME COLORING SHEETS FOR EACH ANIMAL THAT STARTS WITH THE LETTER M!

K Is For Monkey Coloring Pages 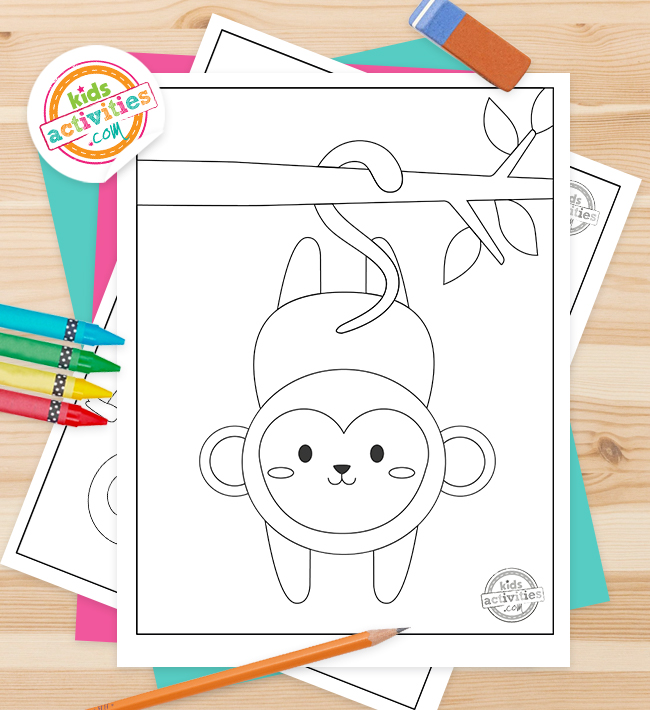 Here at Kids Activities Blog we like monkeys and have a lot of fun monkeys coloring pages and monkeys printables that can be used when celebrating the letter M:

PLACES STARTING WITH THE LETTER M:

Next, in our words starting with the Letter M, we get to find out about some beautiful places.

1. M is for Massachusetts

Home to the first college in North America – Harvard – and one of the original thirteen English colonies is Massachusetts. The first lighthouse in the United States was the Boston Harbor Light Station, built in 1716. Basketball and volleyball were invented here, and the first baseball World Series was held here. Not only an important place for sports, the phone was invented in 1876. Massachusetts has also played an important role in the history of desserts. The first US chocolate factory was built in a Boston neighborhood, and the chocolate chip cookie was invented in 1930 at the Tollhouse Restaurant in Whitman, Massachusetts.

2. M is for Machu Picchu

Machu Picchu is the name of an abandoned stone city built by the Incas. Its means “old mountain” in the native language of the Incas. The Incas were the largest civilization in South America around 600 years ago.Far ahead of their time, they did not use mortar to hold the stone walls together. Instead the stones were precisely cut and wedged tightly together, this has without a doubt helped the city to survive for 600 years. The site of Machu Picchu was created by moving stones and earth to flatten a space between two mountain peaks. Machu Picchu contains an agricultural section made up of stepped terraces. These terraces allowed the Inca to grow plants on the mountain sides by creating flat plots of land on the steep sides.

3. M is for Madagascar

Madagascar is an island country, off the east coast of Africa in the Indian Ocean. It is the fourth largest island in the world. The lemur is only found in the wild in Madagascar. The unique ecology of Madagascar has led some scientists to refer to the country as the “eighth continent” of the world. It has the 3rd largest coral reef system in the world, the Toliara coral reef, off the south-western coast. Madagascar is one of the world’s main suppliers of vanilla and cloves, while coffee, lychees and shrimp are also important agriculturally. The country currently provides half of the world’s supply of sapphires and produces a number of other precious and semi-precious stones.

FOOD THAT STARTS WITH THE LETTER M:

M is for Mango!

This delicious recipe for Mango Chicken Wraps is hands down my one of my very favorite recipes.

Can you think of more examples for words that start with the letter M? Share some of your favorites below!