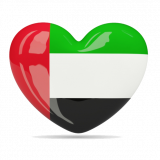 In this new series, Living in the UAE, we highlight the adventures of families moving to, living and growing in the UAE. In the first of the series we spoke to Kelly about how she, her husband, Roy, and three children (age 18 months, 5 years and 7 years), moved from France to Dubai in August last year. Kelly tells us about the experience of joining a growing Jewish community, how she chose the right school and nursery for her children, and what life has been like so far.

The Decision to Move

“We made the decision to relocate to the UAE because we wanted to have the experience of living in another country and to develop our awareness, as a family, of what life is like outside of France, in another culture. Living in France during the The pandemic was complicated and challenging, so we felt a change that would be good.

Of course, I had some apprehensions about moving my family here; it was a big decision. But we had visited Dubai around 4 years ago for a holiday, so I knew it felt safe and I liked what I’d experienced. Also, I heard of some Jewish families who had come to live here before us, and they said that it’s a very safe place to live. I already felt assured about this, but my bigger worry was about my kids missing out on our culture and traditions and our religion while living in the UAE. In France, our kids went to a Jewish school, so these things were all around them. This would be a big change for them, and I was afraid of what they could lose. This is the balance that we had to consider: gaining exposure to the wider world versus potentially losing out on some of our own traditions and culture.

To this relieve worry, my friend connected me to the sister of Rabbi Levi Duchman (Rabbi of the Jewish community in the UAE). I asked her some questions about what it’s like to live here and she reassuringly told me that the community is growing, that there is a Jewish nursery, community centre, a synagogue, kosher food. She said there are Jewish celebrations and events organized for the kids in the community. They even have Hebrew classes at the weekend for kids. I was quite amazed, just a few years ago, this wasn’t here. I thought, I’m OK with this, we will be supported.”

I have also met lots of people who are not from our community: parents from our kids’ school, and neighbors too. I have spoken to people from different countries and religions, and everyone has been very respectful towards us. I am still feeling most comfortable with other French Jewish people, because we have a lot in common, but we interact with lots of different people.”

“Choosing to send my daughter to the Jewish nursery (Mini Miracles) was an easy decision. It was so important for us to be supporting the community and getting involved in all the activities and events going on. The nursery is a hub for this kind of thing, we’re so happy that we are a part of this.

Choosing a school for my sons was a more challenging decision. They were already facing major changes, coming from a Jewish school in France, and so it was important to us that there was as much familiarity as we could find. They spoke almost no English when they first arrived from France, so we had to make sure they would be comfortable. This narrowed down our choices a lot, and we chose ICE (International Concept for Education) School.

ICE School has a bilingual model; half of the day is in French and half in English. This was ideal for us, our boys are happy and are also learning English very well. Despite being a French school, it is quite diverse. There are many families from France, but also from French speaking Arab countries and elsewhere. They know that we are Jewish, and they make sure to protect my kids, as we are still very much a minority. We feel a nice sense of respect there between everyone.

As we had expected, the school isn’t incorporating Jewish traditions or celebrations or teaching about it, but we don’t feel there is a separation of any kind. It’s a lot like our interactions with people here more generally; we haven’t faced anyone behaving aggressively or unpleasantly towards us, people are really just curious, as having a Jewish community in the UAE is still very new. What helps a lot is that between Muslims and Jews, we share a lot of the same values ​​and traditions. There are so many more similarities than differences. We don’t ever really feel lost.”

Comparing Education in the UAE to France

“If I were to compare the experience we’ve had of school in the UAE versus what there is in France, I’d say it is different. Of course, as my kids went to a very good Jewish school, there are things here But comparing with other regular schools in France, I see great things in the schools in the UAE. They seem to develop students in leadership and confidence. Children are really built up; they are taught to be the boss! I think it’s great.”

Living in the UAE Now

“I feel good about our decision to move here, it was the right decision for us. We’ve already had so many nice experiences. We loved attending the Hanukkah celebration at Expo, it was amazing. Hanukkah is a really big event for us.” In Judaism, it’s like our Christmas, and we really celebrate in a big way. Everyone in the Jewish community attended, and so many people from other communities came along; all different nationalities and religions, because they wanted to learn more and see how we do things.

Regarding safety, if I’m honest, I feel we are safer here in the UAE than we were in France. We live comfortably and happily, but I do still feel a little wary of letting my kids wear a Kippah (Jewish cap worn by boys) outside, depending on where we are, because I just feel we would really draw attention and stand out, which I don’t want for my children. It’s not about feeling unsafe or unwelcome, just that we would feel uncomfortable.

“I’m not sure what the future will hold for us, if we will stay in the UAE for a long time or not. Initially, we planned to come here for one year, but now a year has passed, and I can’ t imagine moving back. We take each day as a gift, and we will see what the coming year brings for us. The thing that we feel very sure of is that we feel very good here. Our kids are very happy. We are very happy.”