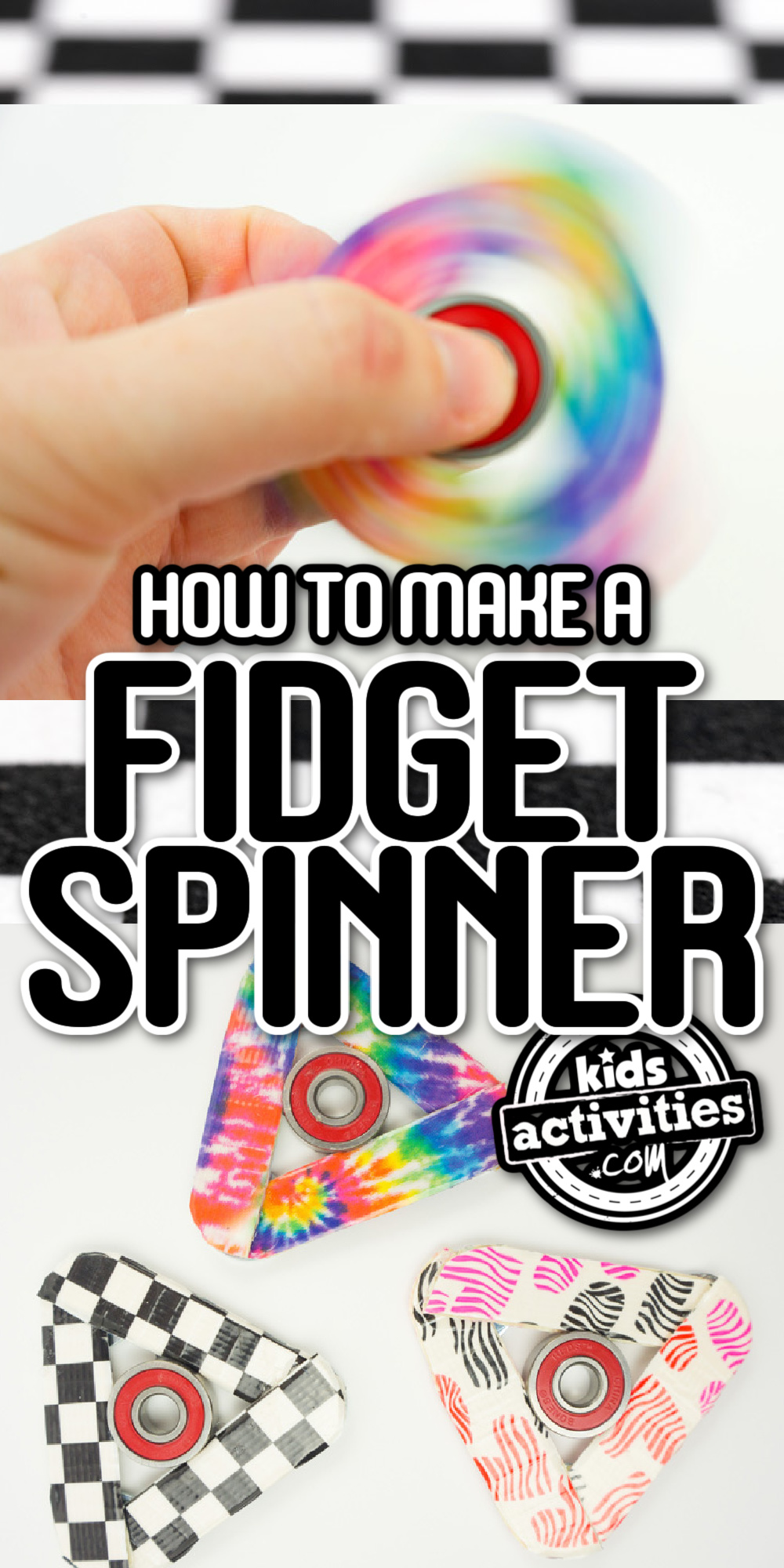 Let’s make a fidget spinner! Fidget spinners are the latest fad, but you don’t have to buy one. We are going to show you how to make a new fidget spinner with just a few craft supplies because it really is a simple toy.

The best thing about this project is that your kids can customize it to make cool fidget spinners that no one else has!

Fidget spinners started being popular in 2017 although you can find similar fidget toys as far back as the early 1990s.

What is a Fidget Spinner?

A fidget spinner is a toy that consists of a ball bearing in the center of a multi-lobed (typically two or three) flat structure made from metal or plastic designed to spin along its axis with very little effort.

Who Invented the Fidget Spinner?

Catherine Hettinger invented the fidget spinner and took it to Hasbro. She was confident that this calming toy would be a big hit, but Hasbro didn’t agree. Despite how popular fidget spinners became years later, Catherine has not been able to capitalize on her invention.

I have known about fidget spinners from the early popularity because it quickly became an effective sensory tool in our house. Use of fidget spinners by kids and adults as a great tool to help expend nervous energy allowing greater concentration is on the rise. The repetitive motion created by centrifugal forces is mesmerizing. That is why it is common to see one on anyone’s desk…no matter their age!

It is also why I love the idea of ​​making a homemade fidget spinner that can be customized. Theses simple figet spinners make great gifts! And they are really fun to make and give or trade to friends. We have seen really fun science fair projects created around hand spinners and they are an easy way to integrate fabulous STEAM activities into summer camps, homeschool, classroom and other youth programs.

How to Make a Fidget Spinner

Short DIY How to Make a Fidget Spinner Video

Instructions How to Make a Fidget Spinner

Cut two of the craft sticks in half lengthwise — you’ll need three of the halved sticks. We are using the very short craft sticks. Obviously if you only have the longer craft sticks, you can cut them to a length of 2.6 inches.

Note: Several other fidget spinner tutorials online have a printable template, but you do not need one when you are starting with three uniform popsicle stick sides like you are with this tutorial.

Now it’s time to decorate the sticks which will form the side of the spinner. This is where your kids can get really creative to make the custom spinner their own. They can paint the sticks, color on them, or cover them in duct tape like we did.

Glue the craft sticks together to form a triangle. Place the skate bearing in the center and tighten the triangle until the bearing is held in place. Secure each joint with a clothespin while the glue hardens.

Turn your fidget spinner over to the bottom of the spinner and apply glue where the skate bearing meets each craft stick. Allow to harden.

Now, your fidget spinner will spin, but to make it go faster and longer, we’ll need to add some weight.

Glue washers onto each of the corners of the triangle. Allow glue to harden, and your fidget spinner is ready!

Don’t have time to make your own fidget spinners? Here are some you can grab online right now:

What color did you make your homemade fidget spinner? Did your wiggly kids enjoy the project {giggle}?