Some months, I can’t wait to share all the new books because there are so many good choices that will appeal to many different kids and interests. This is one of those months.

Fair warning — it might be hard to decide what to read first!

A Duet for Home by Karina Yan Glaser

REALISTIC / HOMELESSNESS
From the author of the Vanderbeeker series, Karina Yan Glaser creates a powerful, hopeful story with complex, three-dimensional characters about grief, family, community, and homelessness. When their family becomes homeless after her dad dies, June helps her little sister and non-functional mom get settled at Huey House. Despite the shock of their new situation, June finds kindness from many of the people at the shelter including a music-loving boy named Jeremiah and Abuela who helps June find viola lessons. Then, their exceptional social worker named Mrs. G gets fired for not agreeing to the city’s new homeless policies. June helps organize a protest against forcing homeless people out of the shelters without support. Through many ups and downs including helping Jeremiah get music lessons and grieving for her dad, Junes that home isn’t a place and family isn’t always blood. 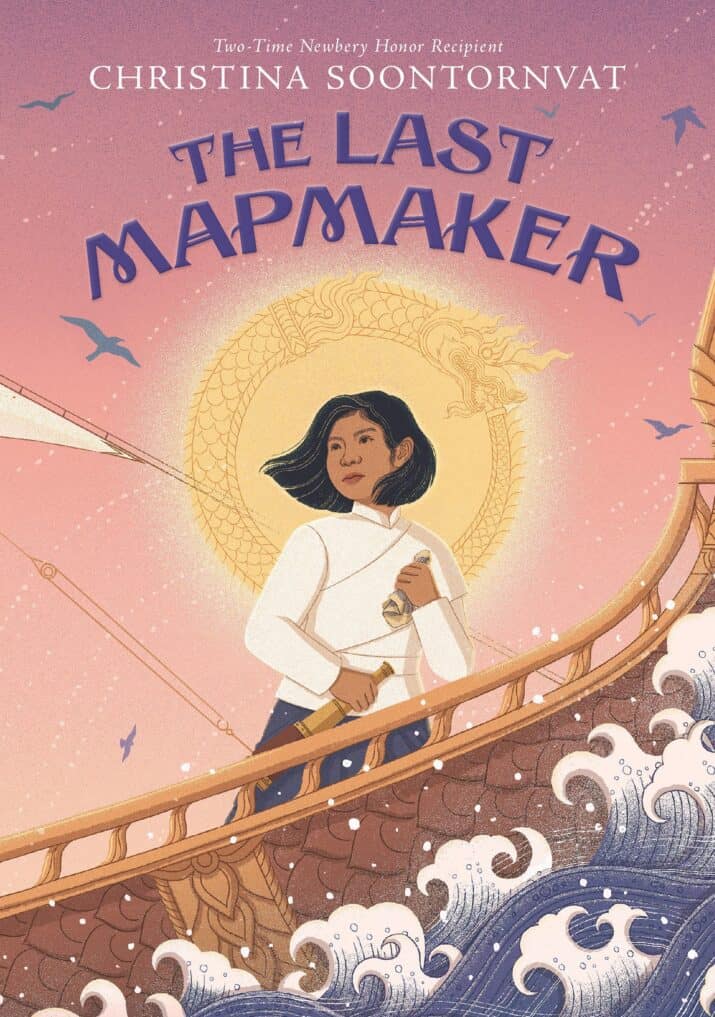 FANTASY
In a Thai-inspired world where caste determines your future, Sai’s new job as a mapmaker’s assistant is far beyond her station, which is why she can’t wait to join the Mapmaker on a sailing quest to find a new continent and maybe, find herself a new home. During the trip, the Mapmaker reveals his past hubris of mapping and claiming already-inhabited lands which their war-hungry country would then use and destroy. After a stop brings a stowaway named Bo aboard, Sai helps him survive by sneaking him food and water. The Mapmaker leaves the voyage, and Sai is slowly is lured into believing the lies of the captain’s manipulative stepsister who eventually leads a murderous mutiny. Shipwrecked, Bo and Sai survive and encounter a new-to-them continent and gigantic creature, realizing that there are a few secrets they’ll never tell anyone else. That some places and creatures must be protected from humanity’s greed. 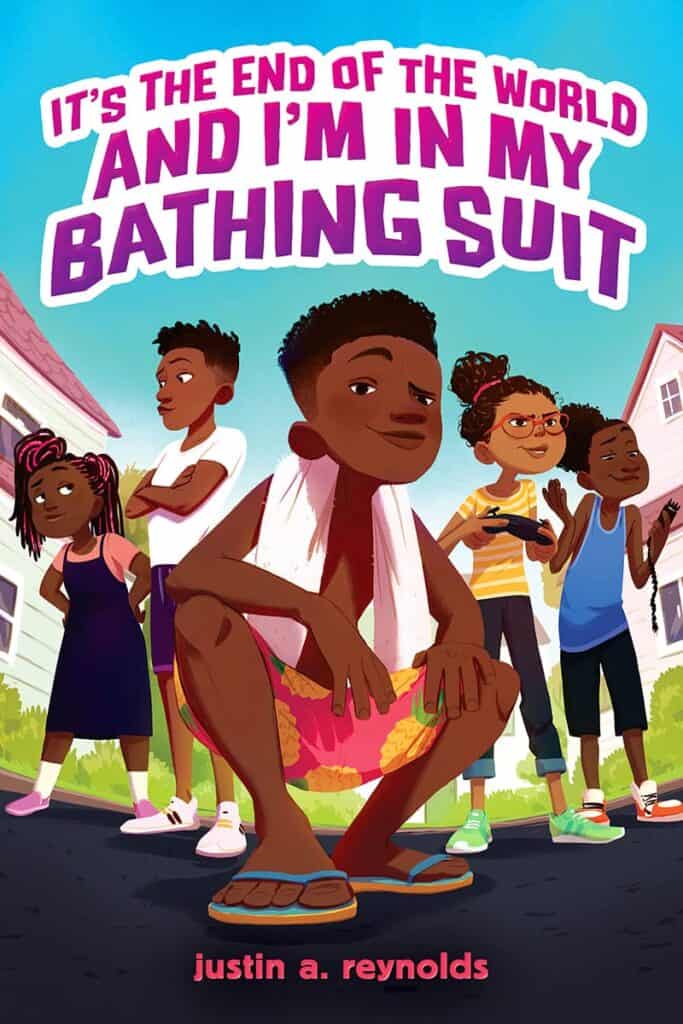 It’s the End of the World and I’m in My Bathing Suit by Justin A. Reynolds
ADVENTURE
When he’s forced to stay home from the beach party because he needs to do his laundry since every single stinky piece of clothing is dirty, Eddie hurries through the washing with quick cycles–until the unexpected power goes out. Eddie leaves the house to investigate and finds four other kids but NO ONE ELSE. No parents. No kids. NO ONE. It’s all very mysterious and suspenseful, especially when the street lights turn back on — without the electricity coming back on. What is going on? Cliff hanger alert– I can’t wait for book two! 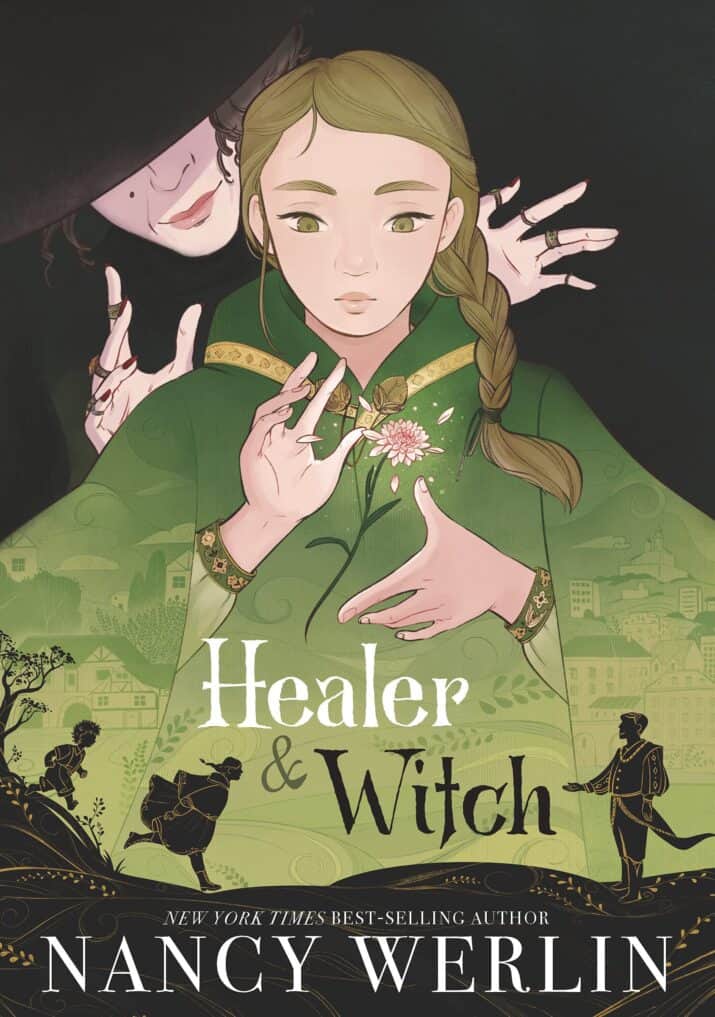 Healer and the Witch by Nancy Werlin
FANTASY
When Sylvie comes into her unusual witch powers, her grand-mere cautions her not to use them and to continue her practice of healing only. Then, when her beloved grand-mere dies, Sylvie ignores that advice and uses her witch magic to remove the cloud of grief from her maman’s head but accidentally removes all knowledge and memory of Sylvie, too. Desperate to fix her mistake and to learn to use her powers for good, Sylvie and a neighbor boy travel through medieval France in search of someone who could train her. They must determine who to trust, not just because witches are hated and burned, but because some people are duplicitous and manipulative—which Sylvie learns the hard way. Their journey shows Sylvie that she’s able to survive difficulties and trust in herself most of all. Very enjoyable. *There’s a hint of romance/marriage which Sylvie postpones until she’s older. 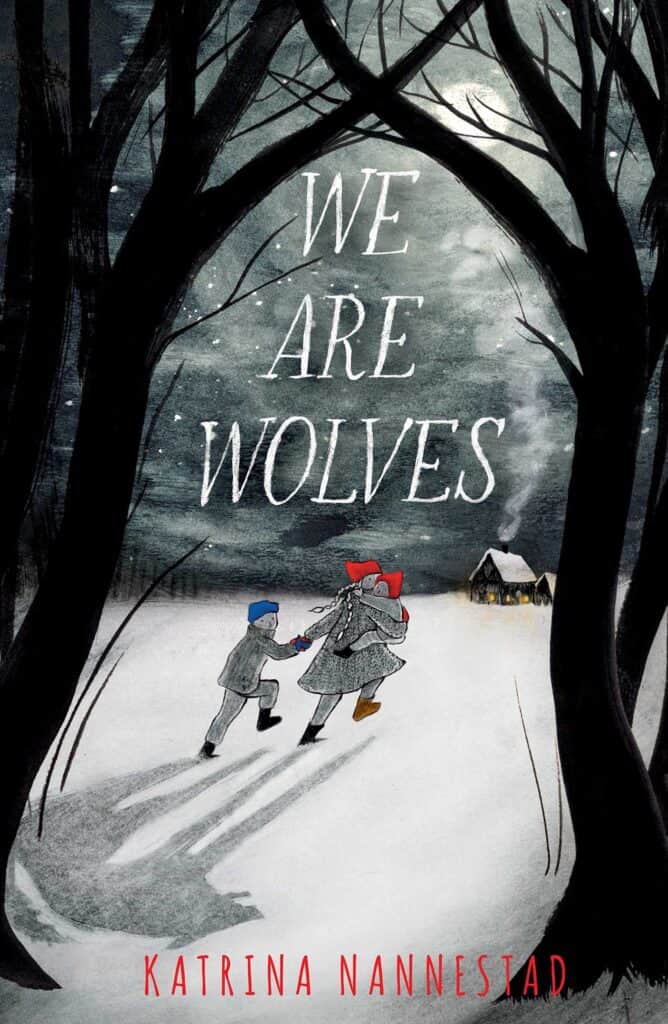 We Are Wolves by Katrina Nanestad
HISTORICAL FICTION / WWII
Not too many books tell about World War II from the German side but this story follows a little girl and her family in East Prussia after Hitler loses the war and the Russians take over, pillaging as they go. It’s about the grays of war, the impossible choices you must make to survive, and how love wins. When Liesl and her siblings are separated from their mother, they survive by stealing and foraging, sometimes in the woods and sometimes in a borrowed home–until the Russians find it. Their story is harrowing and thought-provoking and ultimately, amazing. Plus, it’s based on real German children who fled into the forests of Eastern Europe and became known as Wolfskinder. 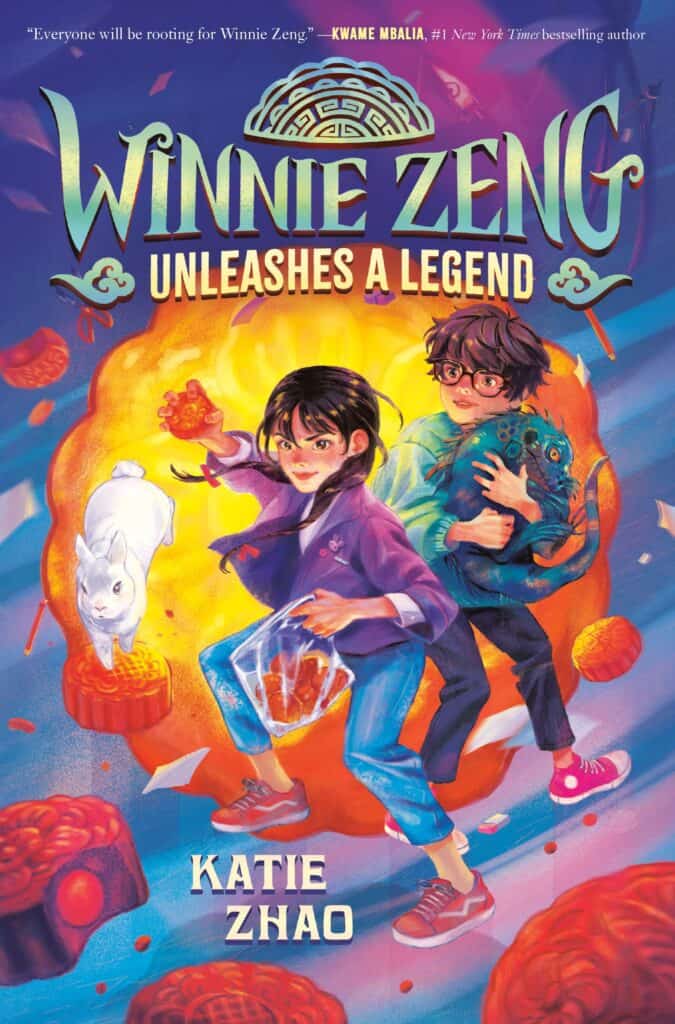 Winnie Zeng Unleashes a Legend by Katie Zhao
MYTHOLOGICAL FICTION (Chinese)
Winnie is trying to navigate middle school and her parent’s high expectations when an old family cookbook unlocks her 6th sense, shaman powers, and the spirit of her LaoLao (grandmother) who enters their pet bunny. LaoLao tells Winnie that she’s a shaman meant to fight evil spirits and send them back to the spirit world but Winnie is not interested — she has too many demands from her parents plus she wants to beat her nemesis in piano and Chinese school. Unfortunately, he’s the other shaman and they’ll need to work together when demons attack so she reluctantly embraces her powers and her new partner. 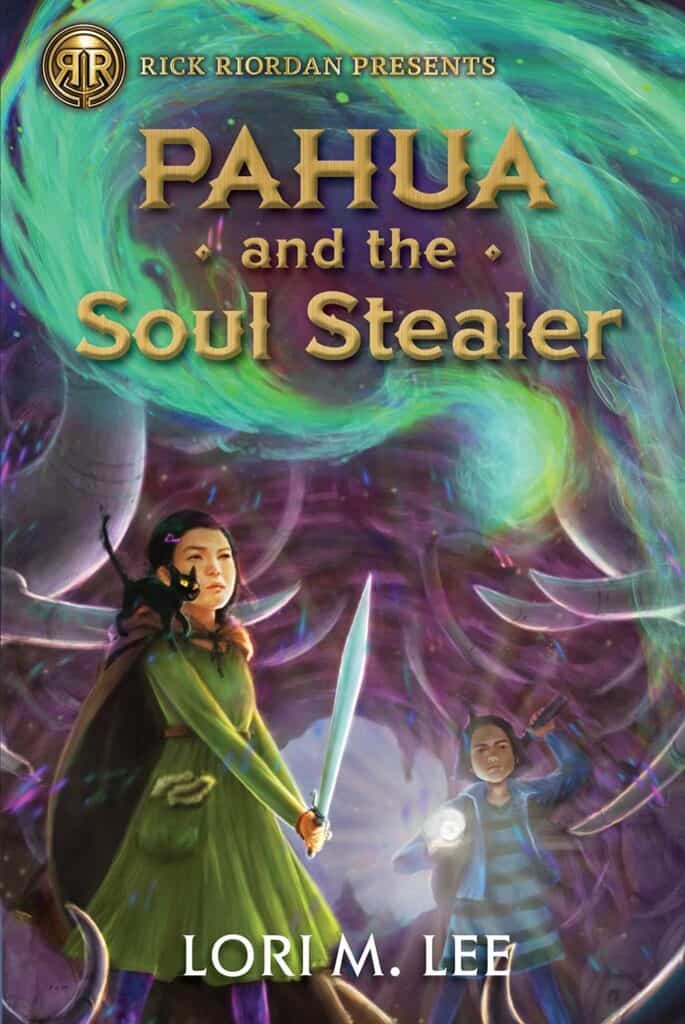 Pahua has always seen spirits, including her best friend who is a cat spirit she names Miv. When she accidentally releases an angry bridge spirit who steals her little brother Matt’s soul, she knows she must fix what she did or Matt will die. She travels to spirit realms to find Matt and the angry spirit along with Miv and an irritable shaman-in-training girl who helps guide them and saves her more than once. Journeying to save her brother involves a lot of almost-dying, cool Hmong mythology world-building, and the chance to grow into herself. I loved Pahua’s character–her devotion to her brother, her kindness and compassion, and her bravery. Excellent.

Traveling with his aunt around the world, Shinji innocently buys a coatl statue in a market — and that purchase changes everything. He’s kidnapped off his aunt’s boat by the Hightower Corporation who wants the statue’s magical power but Shinji’s already bonded with it. A girl who works at the Corporation helps Shinji escape (along with her and her AI mouse) and they ask the mysterious and seemingly rag-tag Society for Explorers and Adventurers for help. The Society helps the kids travel to Mexico where they can return the Quetzalcoatl statue to the font of magic before the magic drains Shinji and before the Corporation’s goons catch up with them. Adventure from the first page, plenty of science and magic, an evil mega-corporation, an ancient curse, a spy, and an angry spider monster — this is an angry mesmerizing, exciting adventure that readers will love. 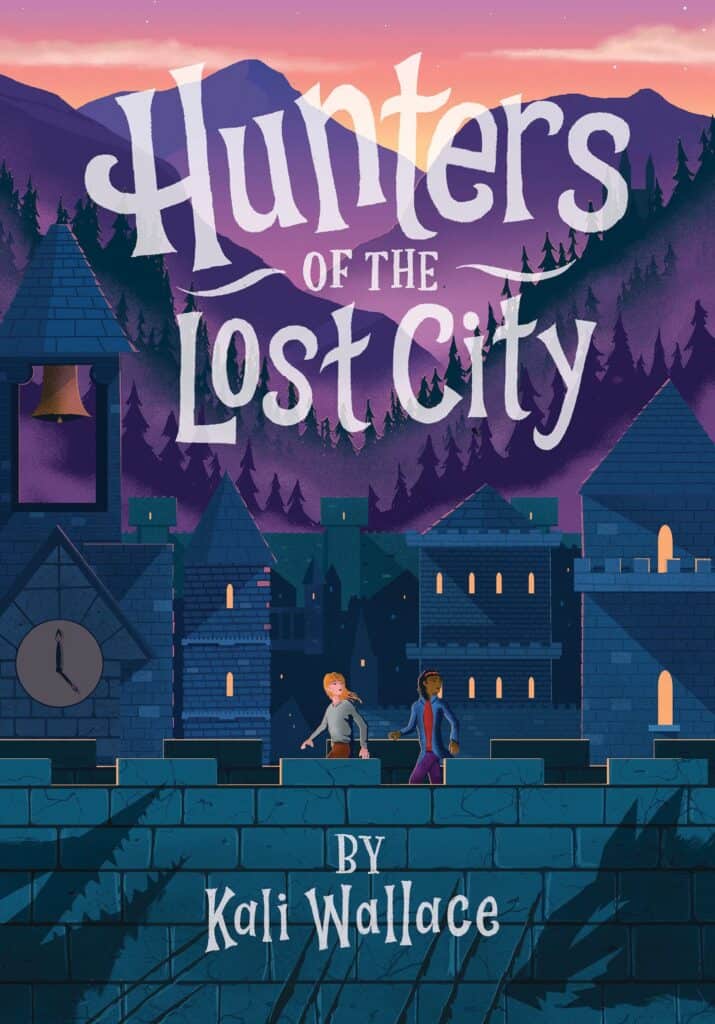 Hunters of the Lost City by Kali Wallace
DYSTOPIAN FANTASY *ages 10+
Octavia accidentally gets locked outside the walls of her city and when a girl saves her life from the twisted magical creatures, learns that their city isn’t the only human city after all. Then, when she brings the lost human girl back to the city, its leaders take the girl captive for “disposal”. Octavia’s only choice is to rescue her new friend and escape the city. They’re helped by others, learning that everything Octavia was taught isn’t true. They find her friend’s family and her not-dead older sister in a city led by a healer who is actually the power-hungry sorceress who unleashed the magical plague on the world and who has Octavia’s walled city in mind for her next target. It’s a compelling read to find out what will happen next! 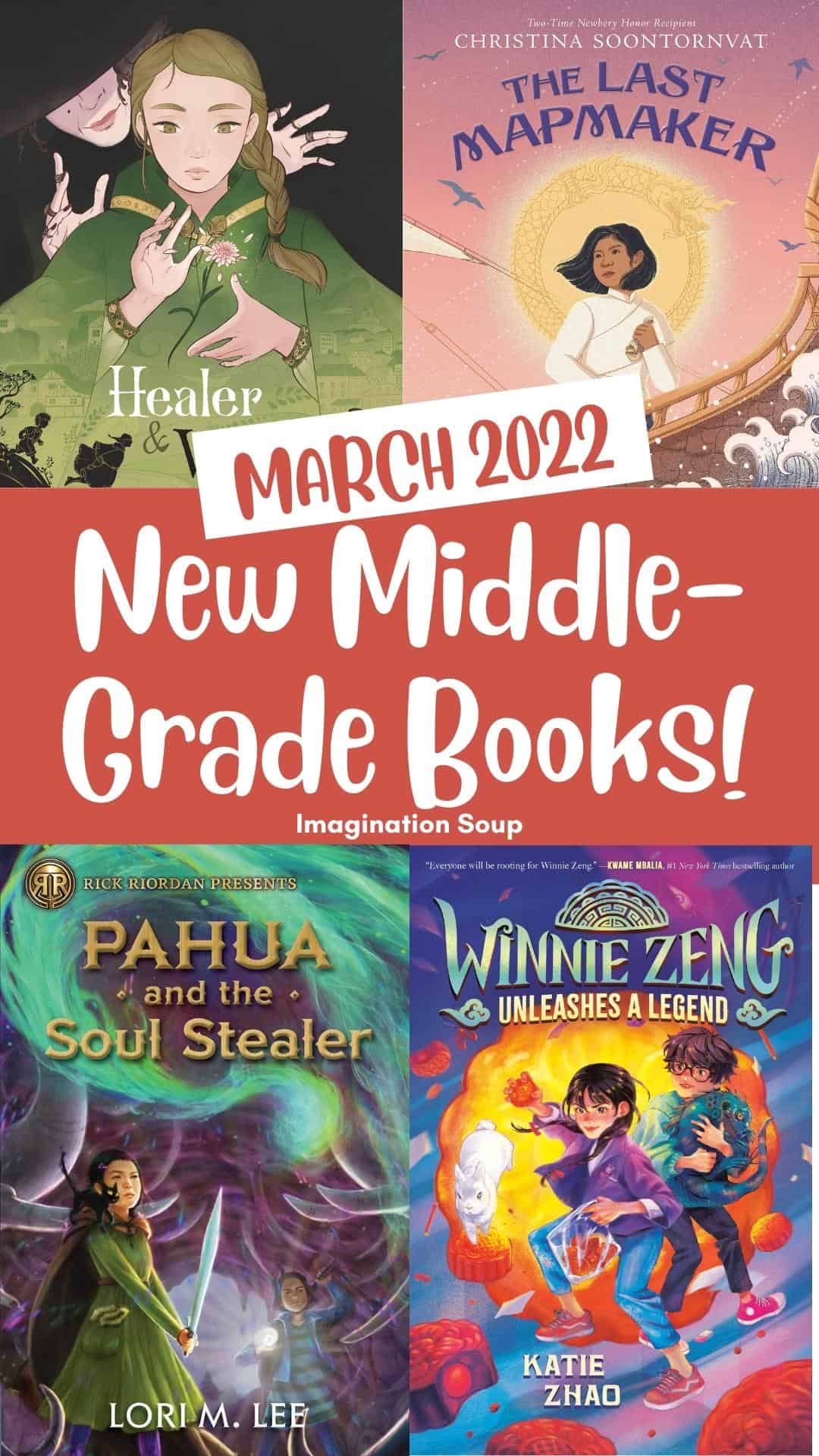